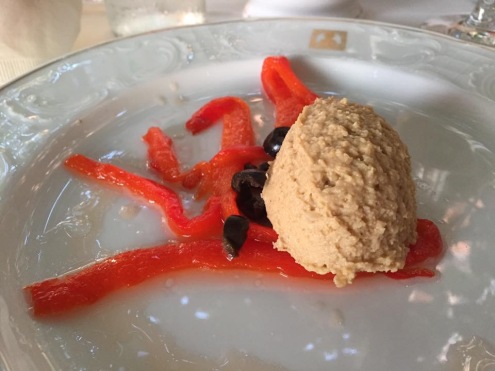 We landed on Lopud Island here in Croatia on Sunday and since we arrived It’s fair to say I have been a hungry herbivore. I had a few happy herbivore moments when I discovered a place that sells three flavours of vegan friendly ice cream and I managed to get Oreos to stave off the hunger. But apart from that it’s been pretty awful until tonight that is.

We have just dined at the Mediterranean style restaurant – Obala – and wow. The quality of service and the flavour packed dishes served were five star. Yes it was expensive but worth every penny.

Tables are available right on the water front or in the more sheltered area – we went for shelter as it was a little windy and am not that keen sitting next to the water.

The restaurant has a fairly good vegetarian option and were keen to point out they could adapt some, not all, of the dishes for vegans. They didn’t judge or turn their nose up at me as had happened in other places that week. The waiter assured me I wouldn’t be leaving hungry – and I certainly didn’t.

I had hummus and roasted red pepper to start – served with homemade bread. Hubby is keen I tell his side of the story too, so if like me you live with a carnivore then you’ll be delighted to know they’ll be well taken care of. Hubby had cream of leek soup and he said it was delicious. He also loved his meat main, again clearing his plate, which is very rare (and he calls me fussy!)

Anyway back to my vegan food – my main was bulgar and wok veg served in a really, if a tad salty, sauce. But it was packed full of flavour and I ate every last bit, using the bread to soak up the sauce. And no I have no shame in doing that.

The cost of my starter was 45 kuna and my main I think was around the 80 kuna mark. A glass of wine each, coffee, water and of course hubbies more expensive meat dish and the bill came in about 460 kuna.

Lopud consists mainly of one hotel and a few shops. By day it is a hot bed of activity with tourists come from the mainland to visit, by night as the sun goes down, it is a delightfully peaceful place and I would highly recommend a walk (there are no cars allowed on the island so unless you manage to flag an elusive golf buggy you have to walk) to Obala for a delightful dining experience.